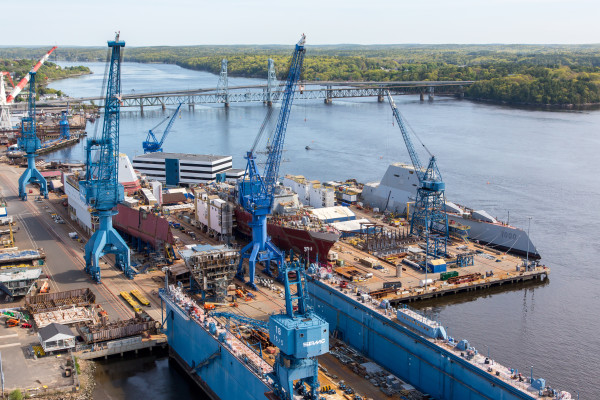 BATH, Maine — After a four-day “fast cruise” in October, the first-in-class DDG 1000, the $7.5 billion future USS Zumwalt, is scheduled to leave Bath Iron Works for sea trials early next month.

The “fast cruise” began Oct. 12 and included four consecutive days of continuous operations conducted at the shipyard, in order to test the crew and key systems of the ship, according to an internal BIW release obtained by the Bangor Daily News.

“The fast cruise was a major event to evaluate readiness of the ship to get underway and was hailed as a big success by our customers and shipyard observers,” BIW Director of Test & Trials Steve Colfer said in the release.

The first “fast cruise” was “designed to exercise and flex all ship systems under a variety of scenarios, including casualty exercises, to observe our crew’s ability to recover,” the release stated. “While equipment and systems have previously undergone lengthy testing, this was the first demonstration of the continuous operation of all systems required in underway operations.”

A second “fast cruise” is scheduled for mid-November, according to the internal release, and it “will emphasize bridge control and interactions, validate specific watch transitions, run additional casualty events and complete additional test scenarios.”

Shipyard spokesman Matt Wickenheiser declined to comment on the fast cruises or sea trials, but said instead, “The men and women of BIW have been working hard on the final phase of our test and activation on DDG 1000, the lead ship of the Zumwalt class, and we’re all looking forward to sea trials. We anticipate we’ll learn a lot as BIW employees put the ship through its paces at sea, as we always do with a new ship — particularly so with a lead ship.”

The future USS Zumwalt’s first sea trials will be a seven-day “shake down” that could begin as soon as Dec. 7, Assistant Secretary of the Navy Sean Stackley toldDefenseNews.

Throughout the weeklong sea trials, the vessel will return to Portland Harbor several times to pick up and drop off officials, and it will then return to the Bath shipyard with plans to head for its homeport of San Diego next year.

The new Zumwalt line of “stealth destroyers,” all three of which are being built in Bath, has been plagued with cost overruns and production delays, mostly related to the need to work out bugs with new weaponry and guidance systems. The Zumwalt line was originally introduced to replace the Arleigh Burke class of destroyers, which the Navy has used since the 1980s. However, when cost projections for the Zumwalt line spiked, the Navy chose to stop the Zumwalt line at three ships and restart construction of Arleigh Burke-class destroyers.

Construction of the future USS Zumwalt has been slower than anticipated, and it is slated for completion in May 2016, about 20 months later than initially expected, according to an October report by Bloomberg. The overall cost of the three ships has increased by 37 percent — to $12.3 billion — since 2009,according to the Congressional Research Office.